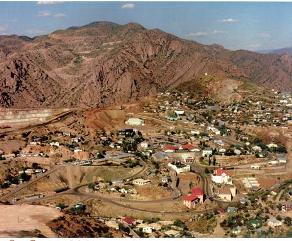 While the early history of Morenci closely parallels that of Clifton, and even Metcalf, the ultimate consolidation of all local mining properties under the banner of Phelps Dodge placed it upon a separate course.

Metcalf, with a population of 5,000 in 1910, was doomed with extinction. With the physical process attending the mining and smelting operation centered upon the Longfellow Hill area, Clifton began its evolution from mining camp toward trading center. Born as Joy's Camp in 1872 the name was later changed to Morenci, from the moment that Phelps Dodge acquired the Arizona Copper Company assets in 1921, Morenci was destined to be the mover and shaker, the provider, the barometer of economic health for the county. Let Morenci prosper, and the whole of Greenlee County thrived. Let Morenci falter, and the County mourned.

At an altitude of 4,836 feet, the layout of the original townsite was almost impassible. Built against the sides of Longfellow Hill, the vertical alignment of building construction gained the town the distinction as one of the most dangerous in the United States. Far and near it came to be known as the town without a wheeled vehicle. As late as 1912 the deliveries to homes by shopkeepers were made by pack burro and ladder. Since there were no roads to speak of, but only foot and burro paths, cars were parked at the foot of the mountain, with the drivers forced to walk from that point on. It is said that small children were tethered in the yards of their homes while playing, to keep them from falling below. Sometime during 1912 the burro paths were widened by blasting to make it possible to bring a vehicle - even an automobile - into town.

The Detroit Copper Company gained ownership of the entire district in 1921. A plaza was built, surrounded by a number of imposing public buildings. The Morenci High School was located on the site of the old smelter. The football field was located on the old slag dump. Extra points and field goals were kicked on the north end of the field, any balls kicked on the south side would disappear down into the Morenci Canyon.

The fate of Old Morenci's was sealed, following in the path of Metcalf, nothing could delay the progression of events. As early as 1908, the presence of a very large low-grade ore body hiding beneath the town had been known. By 1928, the engineering to mine this one percent copper economically had been developed and perfected, and in 1937 the Morenci Pit was opened. In 1965 the dismantling of the old town began to take place to make way for the mining. The graduating class of 1982 was the last class to graduate from this school. The old high school was the final remnant of the old town.

A new town was beginning to take shape among the hills a with a shopping center, post office, clinic, library, the Morenci Club, churches and other living conveniences. High on a ridge sits the Phelps Dodge administration building, further up that road a few miles, past the smelter and through the tunnel, is the open pit where Old Morenci once stood. Old Morenci is now gone, but will never be forgotten. It will always be remembered with fond memories by anyone who lived there.