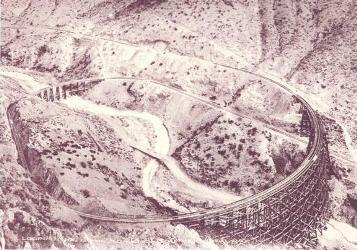 The Detroit management had been considering a railroad line into Morenci for sometime. The surveyors had to find a way to negotiate a 1,400-foot rise in elevation between the Town of Morenci and the San Francisco River. They overcame the elevation difference by looping the track. The most distinguishing feature of the Morenci Southern was a series of five loops used to negotiate the Morenci Gulch. The first loop was at Morenci, which was followed by three loops in the canyon constructed in part with wood trestles, the final loop incorporated one of tunnels by the San Francisco River. The railroad was completed in 1901, and was nicknamed "the cork screw railroad of America". The numerous loops attracted visitors to behold the scene of "wonder and curiosity". The five loops evoked comments from all those who had seen it or dared to ride it. The rail connected Morenci with the Arizona and New Mexico railroad at Guthrie, which was 18 miles away. Heavy grades and sharp curves limited the trains to only three cars and a caboose. Two hours were required for a single trip. In 1914, three loops were replaced by switchback, because the timbered loops were unsteady. The Morenci Southern railroad operated until 1922.